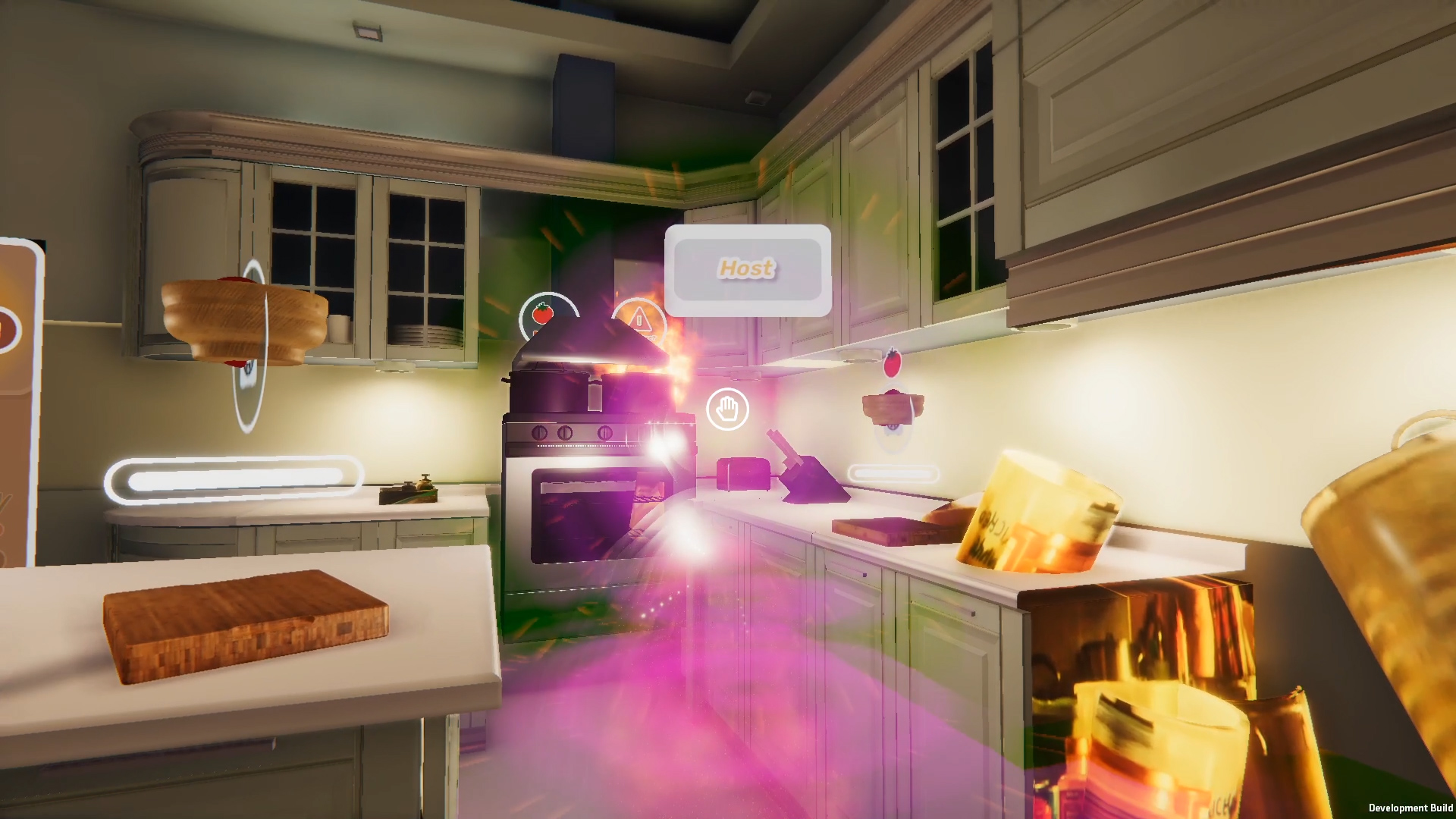 This project was my MFA thesis for ArtCenter College of Design’s Media Design Practices program. It looks at how games and virtual spaces can help us think about queer histories of domestic space, where reconceptualizing the intimacies and rhythms of kinship is a central concern.

This video shows the final prototype, a (mostly) functional Unity application that multiple users could log in to from separate computers.  Users can chat over an audio connection modulated by their proximity and eye contact, as well as engage in a cooking game that parodically calls into question the limits and goals of traditional household roles.

I began by asking about how and why queer people have used, modified, and created our own domestic spaces. I arrived at questions about routine, kinship, and intimacy in the kitchen that drove my design work.

Family is an obvious place to begin exploring how queer folks have used domestic space differently. The topic of chosen family has a long history of particular relevance in the queer community, profiled by popular representations like Pose or Paris is Burning profiling. The conditions under which people identify chosen family with familial terms tend to involve engagements with child-rearing, elder care, and care for chronic health conditions. These instances illustrate the way that family often becomes a framework to understand an intimacy that comes from providing care.

The need for care within queer communities stretches well beyond the examples above. It is a long-standing use of domestic space that its privacy helps afford. In looking at examples of queer intentional communities like Idyll Dandy Acres or archives from Faerie gatherings, discussions of the community as a space of healing are never far from the surface. As with all intentional communities, these changes in relation involve a change in the material structure of the spaces that support them.

Family, however, is about more than care. Bonds of kinship establish familial structures within which individuals gain a more firm sense of self that is grounded by lived relationships to others. These roles have a uniqely historical dimension that concepts of inheritance and lineage engage. Family is about belonging as much as care-taking.

How can we better understand rethinking kinship through intimacy as a foundational experience and goal of queer domestic life? 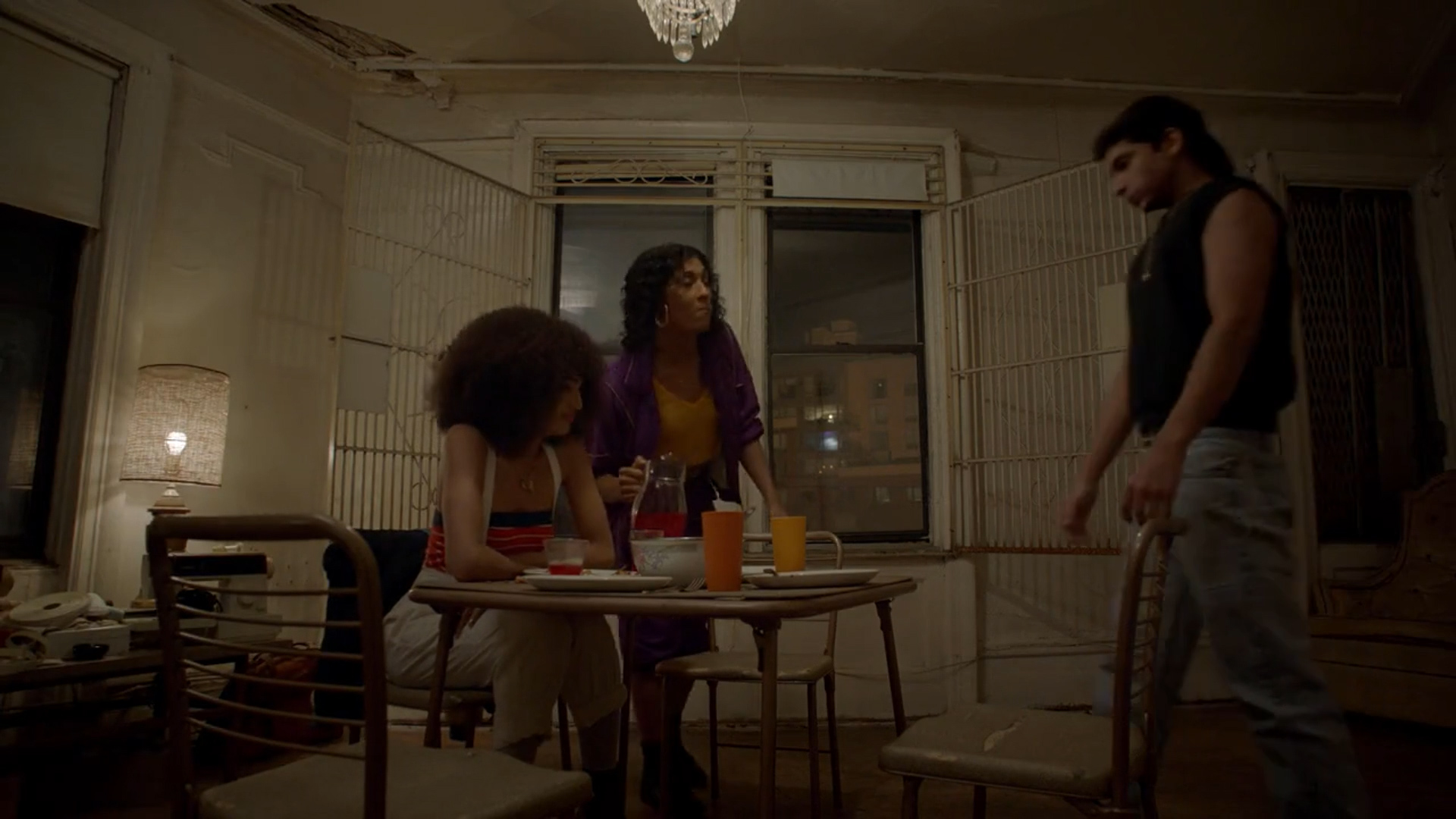 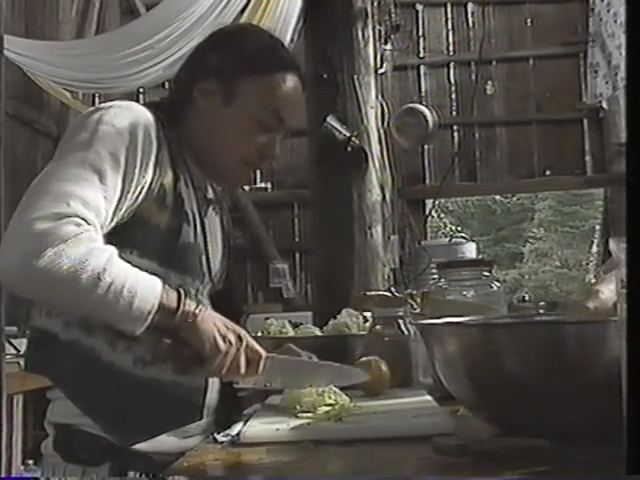 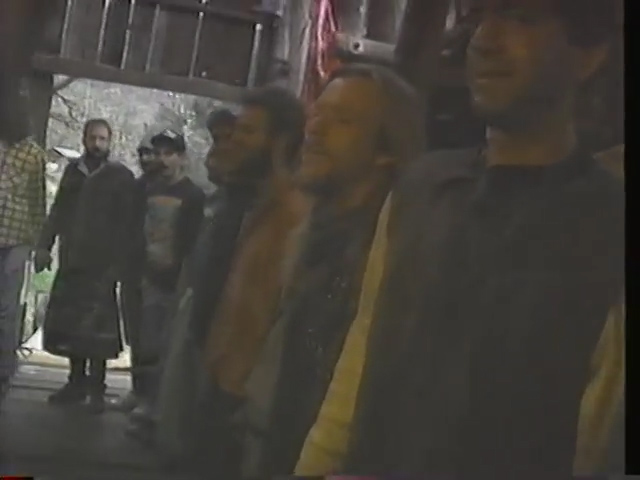 As mentioned above, homes are places where people engage larger cultural narratives through rituals and routines that we can understand temporally. Sarah Ahmed and Elizabeth Freeman explore the way that family relationships enacted in domestic space place individuals within communal histories, linking affective experience of domestic routine to collective identity through the framework of family.

In Time Binds, Freeman identifies how, via photography, family histories became newly legible in the early 20th century in terms of larger arcs of societal progress. This directionality came with an attendant regime of rationalization via home economics, which applied temporal measurement in ways similar to industrial applications. What people did in the household, especially the women who were generally asked to maintain them, thus became a point of connection between individual activity and larger family and even national history. Freeman terms this new set of expectations, which related family history and identity to rationalized routine, “chrononormativity”. Queer domestic life often involves a break with these larger structures via these linear and regulated routines.

For Ahmed, the kitchen especially becomes a place where the alignments of generations are felt through eye contact and made explicit. Tables are an especially generative object for Ahmed,  who sees them as a kind of experiential forum around which people gather, and on which they use things. In her recounting of time with her extended family, and of traveling with her partner, she identifies these moments of orientation towards the ideals of heterosexual households.

In her profile of women who recount kitchen histories including feminist squats in 1970s Hackney, Rachel Scicluna

The participatory engagement I conducted also spoke to this embedding of rules in space, with the participant discussing the significance of bringing guests into the kitchen. For her, this act broke a perceived boundary that zoned intimacies into households and couples.

How can a critical perspective towards rhythm and routine help us understand the way that experience of kitchen space links us to familial and cultural understandings? 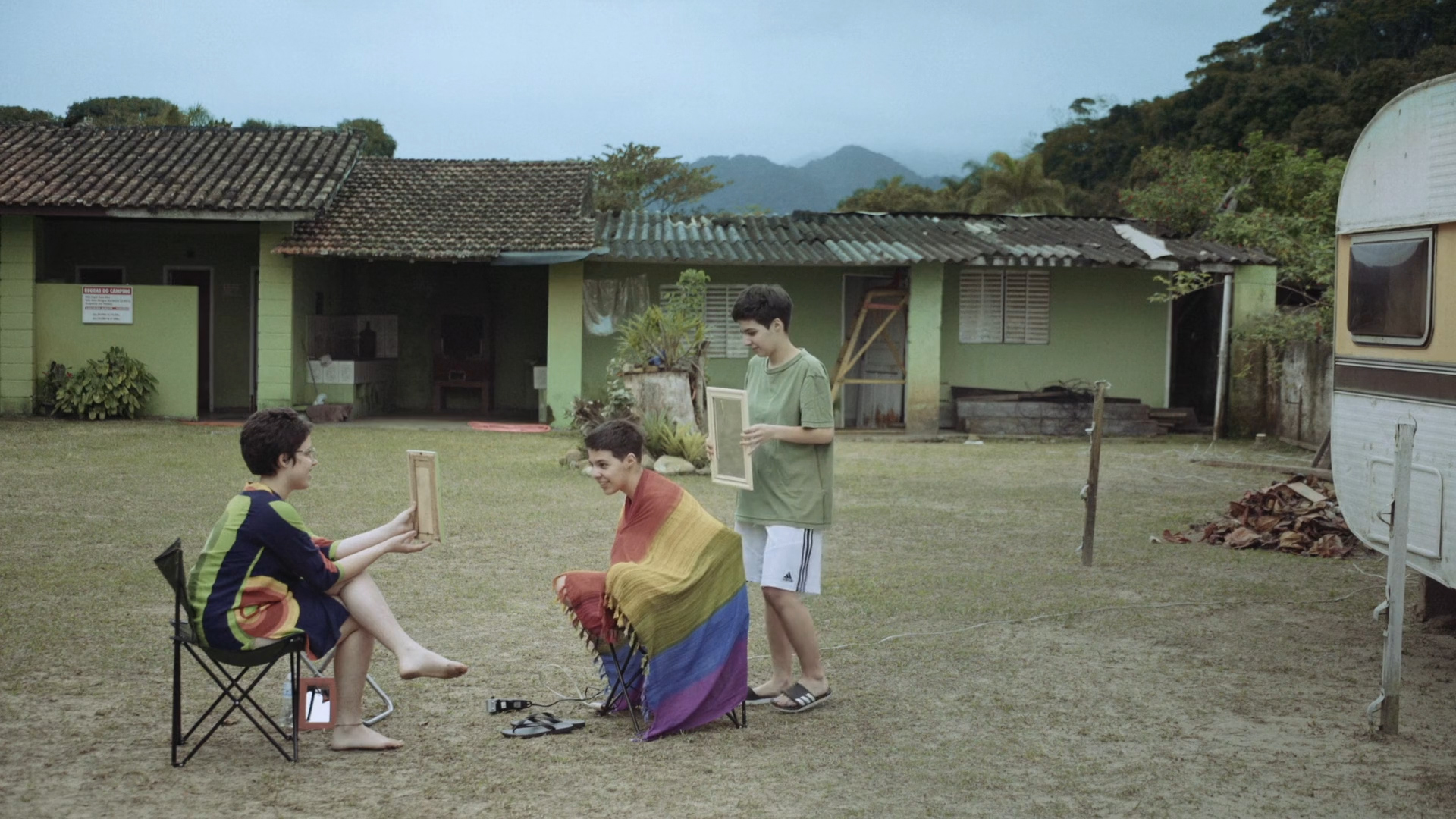 An image from Breakwater, 2019 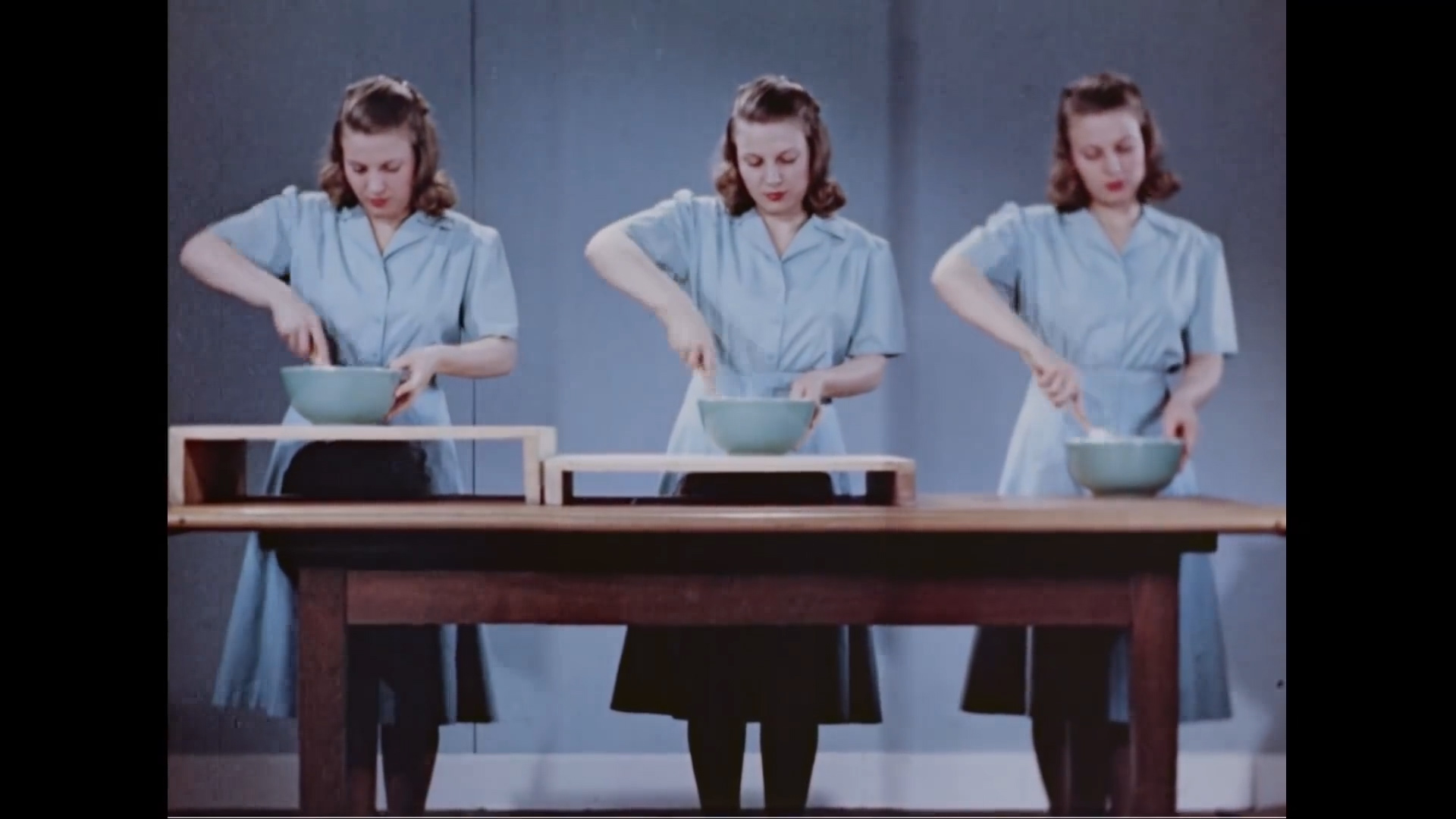 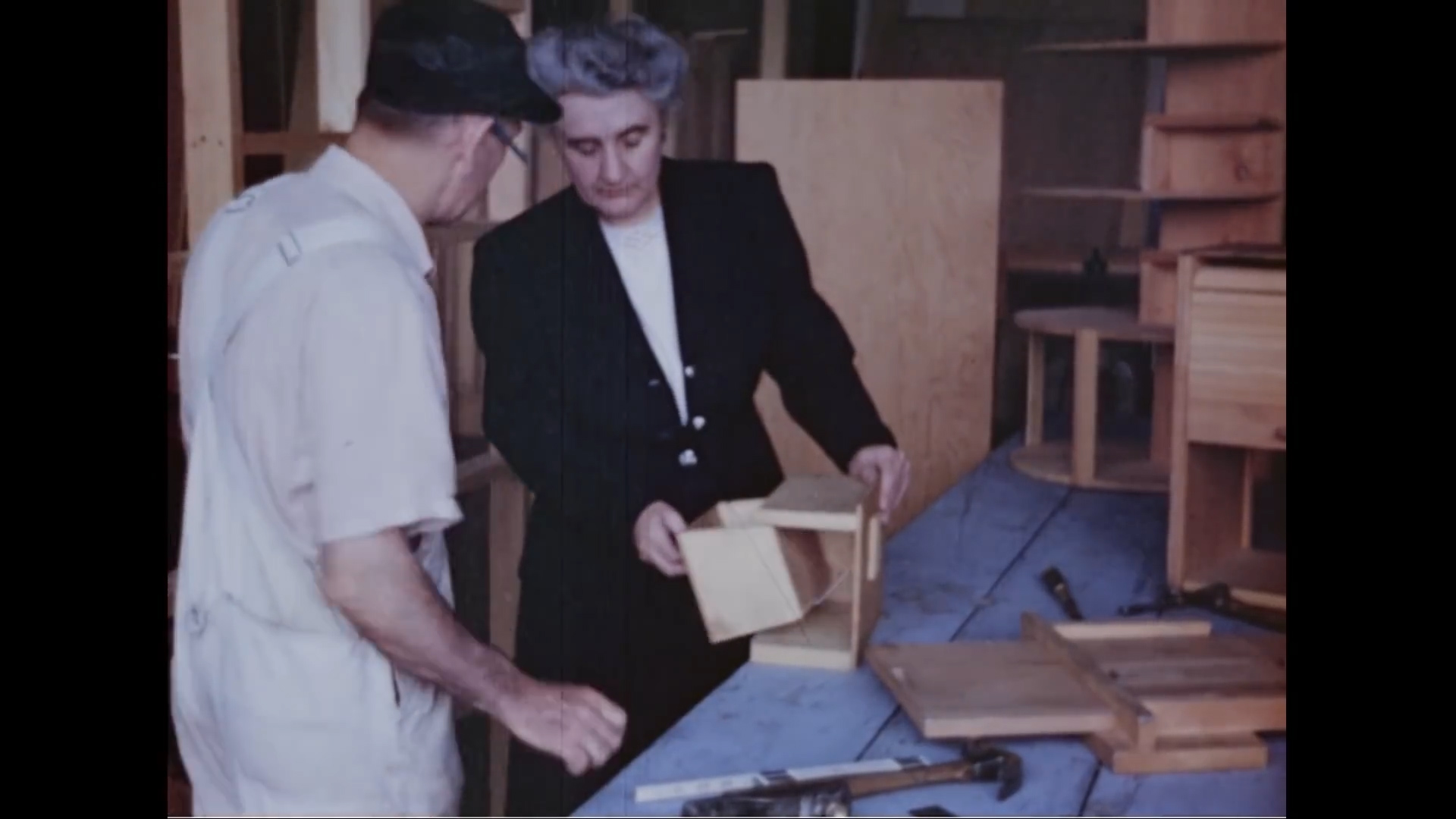 My design response to this question was the project pictured at the top, a virtual chat room in the form of a kitchen. It responded to the directions listed above in the following ways.

Orchestrating the gaze for intimacy

I designed this prototype to link two kitchens together, exploring how to make sharing a recipe more intimate. I was inspired by the typology of fractured and enfolded semi-private space found in queer venues for more direct intimacy.

The screen displayed a timeline view of a recipe that one user would share with the other. I did some motion tests around the idea that the timeline would be a dynamic spline, and possbily require gestural input to reorder, necessitating collaboration and play.

Although it wasn’t functional, the idea of facilitating eye contact or gaze seemed like a compelling way to encourage a certain kind of intimacy. It also spoke to themes about eye contact and looking within the kitchen in Rachel Sicluna and Sarah Ahmed's writing. 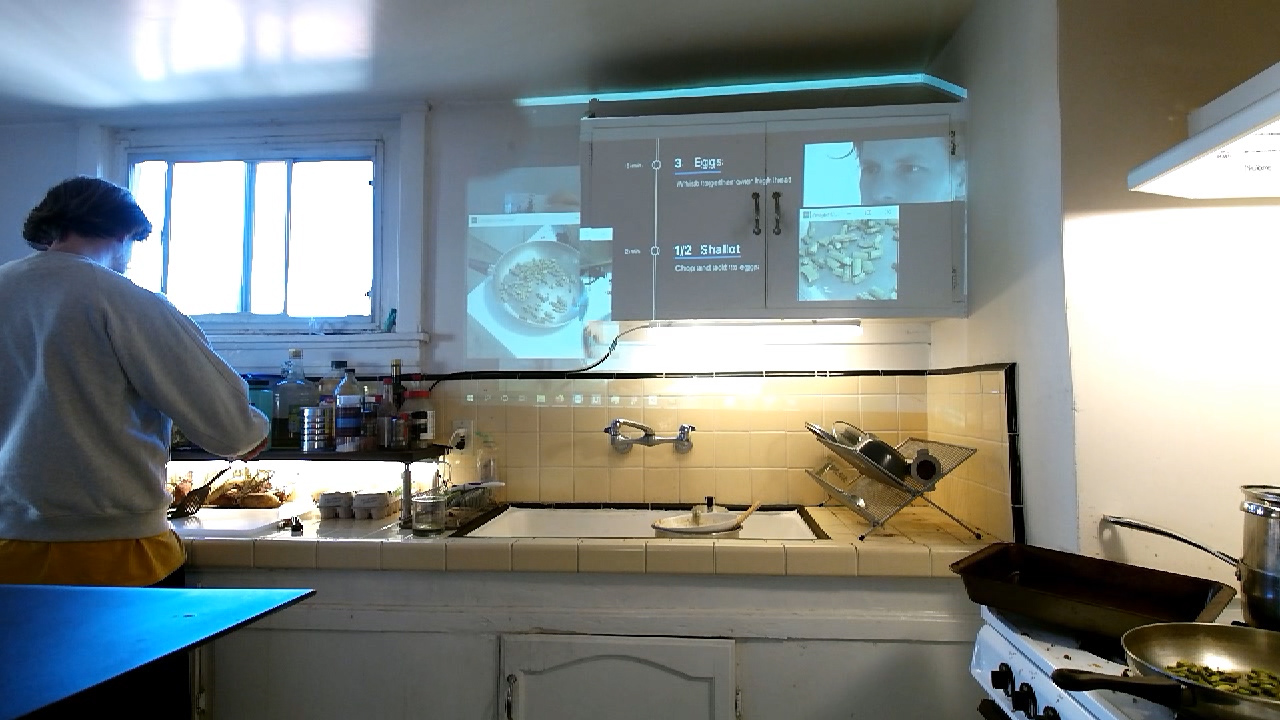 Gaze as a conversational constraint

As I evolved the prototype, I kept the idea of gaze, exploring how it could be even more present as a constraint that controlled how players interacted with each other and the environment.

I looked at how VR or a similar first-person virtual environment could be a way to experience different dimensions of spatial presence.

As I started iterating on these ideas, I realized that spatially-located audio could become a powerful tool in creating a sense of presence. As I realized that I didn’t want to use representational avatars, emphasizing audio as a primary dimension of connection made even more sense. The diagram to the right shows the final system, by which users can judge distance to each other through tones playing throughout the space.

I also used visual feedback for maintaining gaze so that users could find each other and get feedback about when their connection was fading. 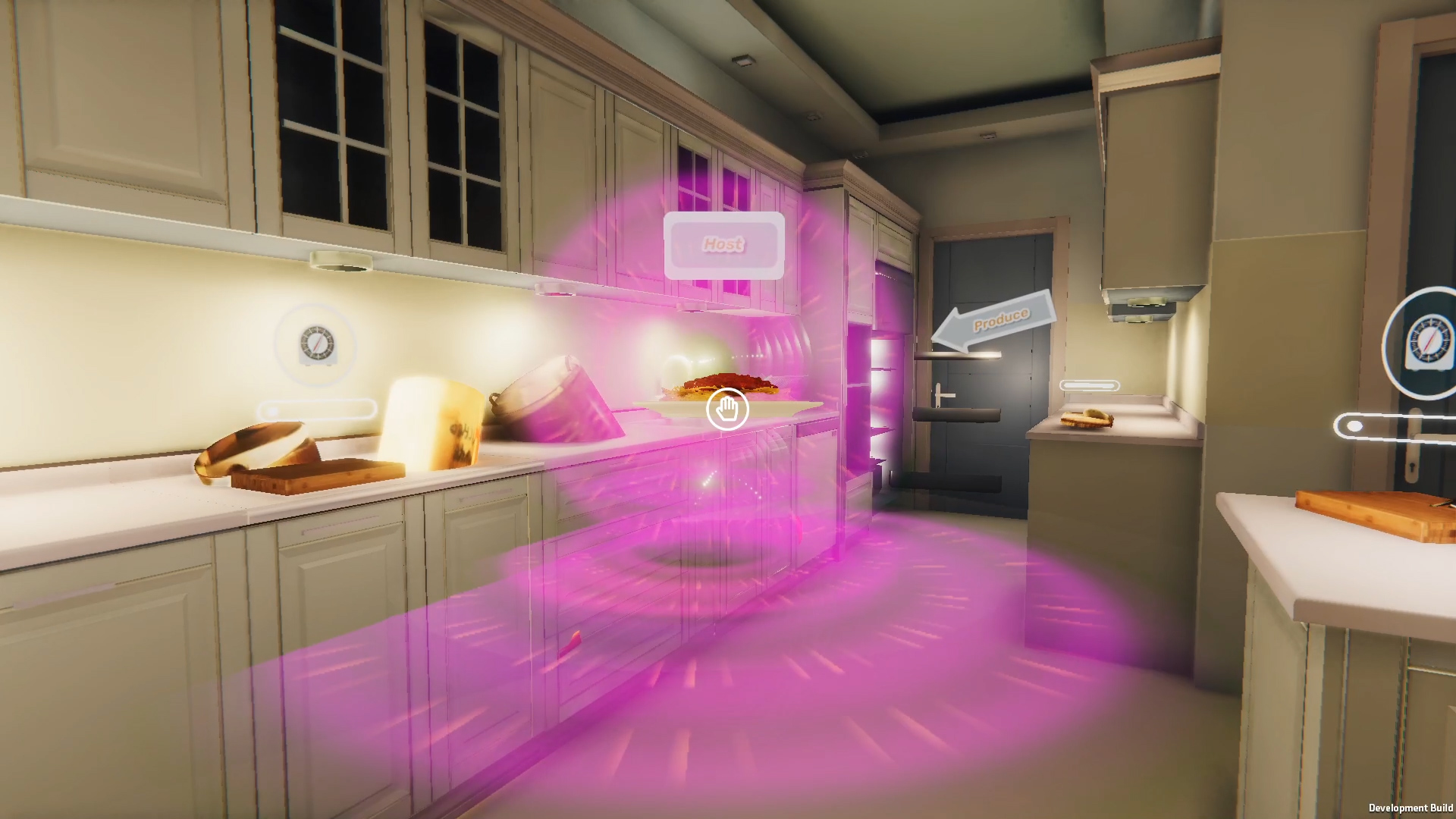 When users are apart or not looking at each other, the central avatars dissolve and are replaced by moving concentric rings, as shown above. 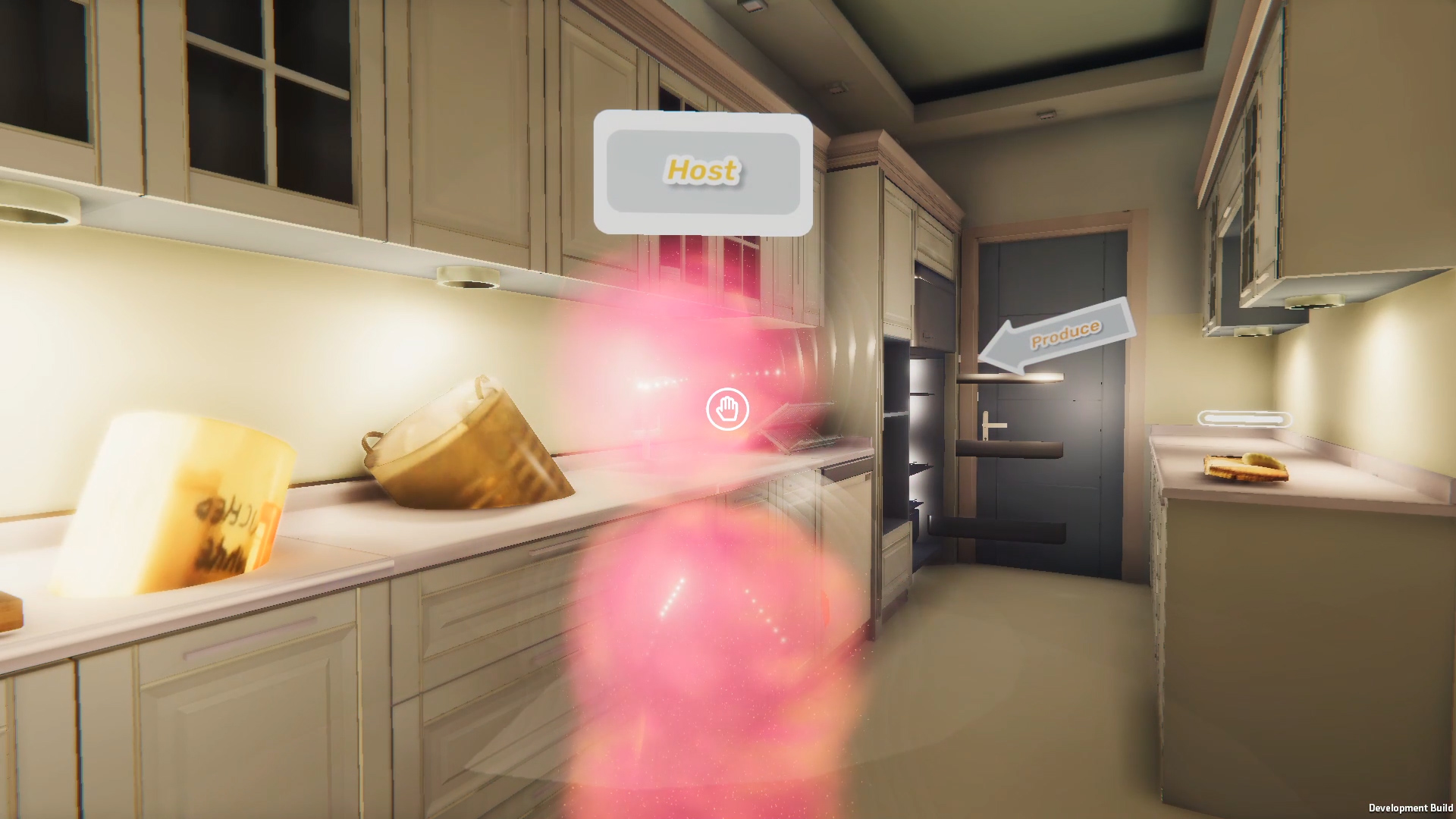 When users look at each other, avatars become filled in with slowly shifting colors. The design is detailed, layered, and hypnotic, encouraging contemplation.

I left the idea of sharing a recipe behind and thought about a way for people to interact through cooking in a fully virtual kitchen. Inspired by ideas from queer independent game design, I looked at how the experience could embody a queer perspective by placing users in a critical stance towards norms and routines of kitchen space.

I adopted game mechanics common to casual-format cooking games: users pick up items representing ingredients or processed food and carry them from place to place within certain time constraints. The game provides an explicit set of routines for the space, regulated by timers. 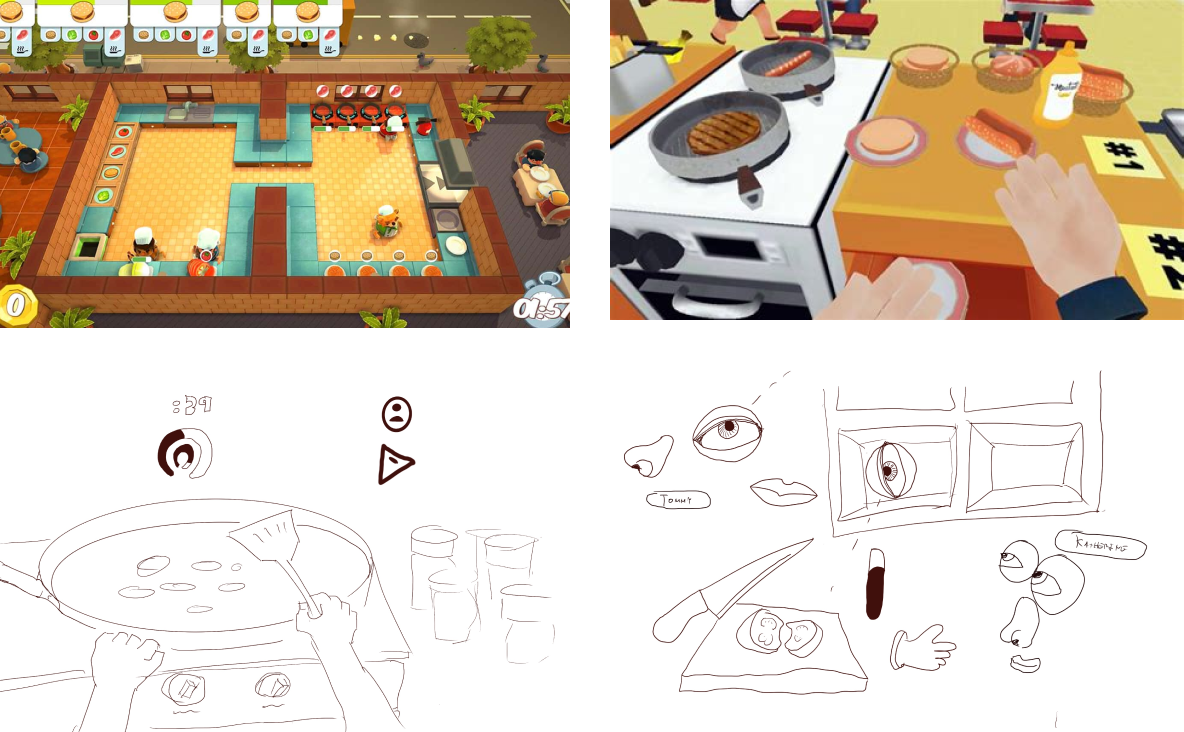 References from cooking games and early sketches during concept development

References from cooking games and early sketches during concept development

A scoreboard within the dining room advertises achievements referring to middle-class household success, asking how the association of dyadic heterosexual couple with domestic space implies certain borders on types of intimacy. This was a theme that emerged in my research.

To make interaction with the space an opening for critique, I inverted how the space was set up, making food preparation and sustained eye contact difficult. Users thus experience the default layout of the space as a hindrance to cooking while having a conversation.

The household scoreboard in the game

History out of joint

By moving cabinets around, users can reshuffle the layout of the kitchen, allowing them to move the activities from the cooking game so that they can cook and maintain eye contact and proximity. This action also reveals images and objects from documentaries about queer cooking spaces, from which they can hear audio when they pick items up.

Elizabeth Freeman borrows the Shakespearean phrase to describe how breaks and discontinuities with familial, cultural, and national histories are experienced by queer folks at an embodied level. She shows how queer artists often create disjointed relationships between their own experiences of lived histories and more official recordings.

In my own design, I wanted to place users in relationship to queer history accessed by failure in norms. This came from the invitation to failure in household routines of the game design, but also in the explicit inclusion of images and objects from queer kitchens. I chose items that came from kitchens where the specificities of queer use was more obvious, as in the case of intentional communities or projects like The Okra Project, that uses cooking to build networks of care. 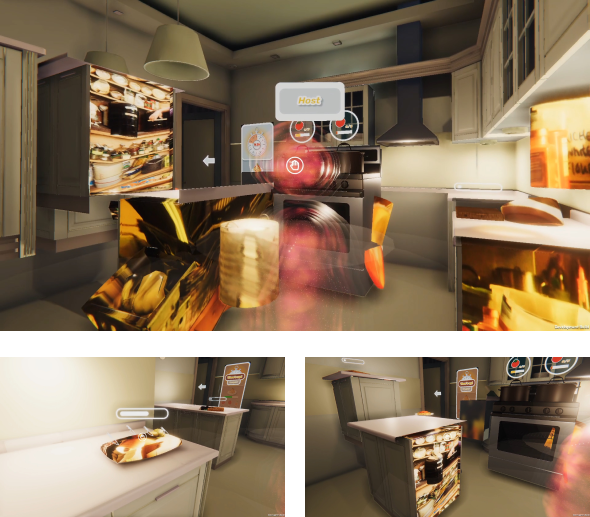